Recently employees of a Cambridge clothing company, Dead Happy, thought up a promotional scheme. They wanted fans of the company to put stickers, preferably rude, onto the back of mobility scooters, then take photos to upload onto Facebook.

I should stress that this wasn't official company policy: as soon as the boss of the company found out about it, he removed the Facebook posts in question. The police have taken the incident very seriously, and at the last report, were speaking to those concerned.

But it's just a prank, right? What harm can it do?

I haven't blogged so far about Ricky Gervais's pilot show Derek, partly because I wasn't sure myself what my feelings were about it. Was I uncomfortable about the idea because I've never really been a fan of Gervais? Because I was unconvinced by his conversion after "mong-gate" last year? Apparently he's been using the word "mong" in his stage act for several years, followed by a mock-coy "I'm not supposed to say that, am I?", so his protestations thaat he didn't know the word was offensive ring hollow. 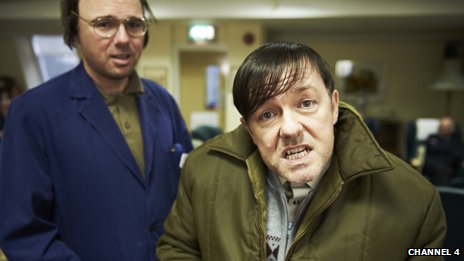 
Derek is a fictional character and is defined by his creator. Me. If I say I don't mean him to be disabled then that’s it. A fictional doctor can't come along and prove me wrong.

Well, that all sounds fine. Except that to me, and the huge majority of people I know who watched the programme, Derek very clearly was disabled, either with mild learning difficulties or (some people suggested) on the autistic spectrum. The people I'm talking about are people with disabilities themselves, or parents of children with autism. Y'know, people who actually know what they're talking about when it comes to disability, unlike Ricky Gervais - remember he claimed not to know that "mong" was an offensive term for people with Down's syndrome?

What effect did Gervais want Derek to produce in the viewer? Well the programme was billed as a "comedy drama". Looking at the hashtag #Derek on Twitter during the programme, most mainstream viewers seemed to find it very funny - but they were laughing at Derek, not with him. A minority found the programme sad, because of Derek's condition.


One review of Derek said they weren't sure if they were meant to laugh or cry. I'd suggest that whatever happened was the correct response

Some writers can produce work that makes the viewer both laugh and cry. Is Gervais one such? I would suggest not on this evidence, because he encourages people to laugh at his characters and sympathise with them, rather than laughing with and empathising with them.

But what harm can a TV programme do?

Well, a couple of days after the programme was broadcast, I was at my local shops. A bunch of kids yelled "Oi, Derek!" at me. I'm female, I don't have learning difficulties, and I use a wheelchair. The only similarity I can think of between me and Derek is...we're both disabled. For these kids at least, the programme was making disabled people in general into objects of derision and targets for abuse.

And there's evidence that as disablist speech becomes more common, so does disablist hate crime. A report at the end of 2011 showed that hate crime had risen by more than 75% in one year. Disabled people report being spat at, having faeces pushed through their letterboxes, and even being tipped out of their wheelchairs or physically attacked.

In just one terrible example, Fiona Pilkington killed her disabled daughter then committed suicide after years of constant abuse from local youths. In at least one case, a man who called the police several times to report abuse was recorded as a nuisance caller.

The reasons for this rise are many. One is the prevailing "anti-scrounger" rhetoric from the Government and the red-tops,which has the tendency to paint all disabled people (working or not) as thieves, stealing undeserved monies from the apocryphal "hard-working taxpayer".

But another has to be the dehumanisation of disabled people. If we're suitable objects for laughter - or pity - than what does it matter if you take it a little further? We're not like them, after all. We're different. But somehow, all the same: all disabled.

If you're the victim of disability hate crime (or any other kind), please report it. You'll get the support you need, the offenders will hopefully be dealt with, and it'll send out a message to the wider community that this is just not acceptable.

And who knows? Maybe, just maybe, one day Ricky Gervais will work out that the way he takes the mickey out of the disabled really isn't funny!

This is my post for Blogging Against Disablism Day 2012. Follow the link to the Goldfish's always excellent blog for lots more blog posts on the general topic of disablism.
Posted by Funky Mango at 10:13