First this month, a very exciting discovery (for researchers and science geeks like me, anyway). Until now, MS researchers working in the very early stages of a project, when animals must be used, had only been able to use non-human primates when the illness had been artificially induced. Now a naturally occurring disease in Japanese macaques has been found by researchers in America. 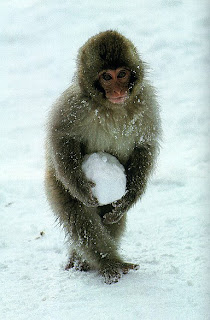 This can give many more clues about the causes and development of the disease. It has already been discovered that the condition is associated with a herpes virus - linking in with previous research suggesting that MS in humans may be linked to previous infection with the herpes strain Epstein-Barr virus, which causes glandular fever (mononucleosis).

More herpes news. A Taiwanese research group have found that there may be an increased risk of MS in the year following an attack of shingles, caused by the herpes zoster virus, which also causes chickenpox. The study followed very large groups of people with and without shingles, and found that those with were almost 4 times as likely to develop MS as those without. This is a very interesting study, well designed and with a very large sample group: however it was limited almost entirely to Chinese patients, and Asian populations have considerably lower rates of MS than Western. This work needs to be repeated on other ethnic groups.

Now a piece of research that may not be news to many of us (including me!). American researchers have discovered that fatigue is the first symptom of MS in nearly 30% of cases, often months or even years before any demyelination can be observed. I can certainly remember multiple visits to my GP complaining of fatigue, when I was either told "But everyone gets tired." ("No this isn't NORMAL tired!") or offered anti-depressants. Not particularly helpful.

The group is planning studies to see if unexplained fatigue can be used as a predictor of MS, and another to see if people whose first MS symptom is fatigue differ in any other way from those who have multiple MS-related symptoms.

It's been known for some time that women with MS who become pregnant have a higher than normal likelihood of experiencing a remission during pregnancy, and then experiencing a relapse after the birth. Now Canadian researchers have looked at the effect of MS on the actual pregnancy. They found overall that pregnancy was safe for women with MS, with no significant difference in gestational age, birth weight or type of birth (vaginal or caesarian).

Women with a greater level of disability were more likely to have adverse birth outcomes, but these did not reach statistically significant levels. The researchers also found that women with MS were more likely to be overweight, which is associated with greater risk during pregnancy and birth.

Now, on to treatments, and first some news about existing drugs. I've spoken before about the highly promising treatment Tysabri.  Getting Tysabri carries the risk of developing the rare but severe condition progressive multifocal leukoencephalopathy (PML). PML is more likely if you have previous been exposed to (and therefore have antibodies to) anti-JC virus (JCV).

From now on, all patients in the EU will be tested for JCV antibody status before starting on Tysabri, and JCV antibody status will be included as a risk factor in Tysabri labelling. The risk of PML is still there, but it should be greatly reduced if people with antibodies to JCV do not take the drug.

Another existing treatment, of longer standing, is Copaxone(glatimer acetate). A group of Canadian researchers found that after a year patients receiving a new oral drug, teriflunomide, along with Copaxone, had only about 1/3 the number of lesions of a control group who took Copaxone plus a placebo tablet.

Teriflunomide has previously been tested with interferon: that trial also showed impressive results. It operates by stopping certain immune cells from dividing. This sounds like a very promising adjunct treatment. I hope it's trialled in larger groups, and against other therapies, as soon as possible.

American researchers have developed a very promising new approach to identifying the "self" proteins our bodies attack in auto-immune diseases like MS, rheumatoid arthritis and diabetes. Their new technique, called phage immunoprecipitation sequencing, allows the identification of any interaction between an autoantibody in the cerebrospinal fluid and the self-protein that drives the autoimmune response. This work is at very early stages, but could eventually be developed into diagnostic tests and even treatments.

Meanwhile, British researchers have discovered a synthetic chemical compound which both reduces the inflammatory response in the body and stimulates the body to produce interferon-beta, an anti-inflammatory molecule commonly given to people with MS. Together, these effects cause significant reduction of inflammation in an animal model of MS. The researchers also found that immune system cells from people with MS were more sensitive to the drug than immune system cells from people without the condition.

Excitingly, a joint research group from Britain and the USA have discovered a new molecule that they believe may lead to a drug able to repair myelin by stimulating stem cells. Again, this is very early stage research. Hopefully it will move to clinical trials and ultimately to some form of treatment, probably within 10-15 years. That would repay all the work that's being going on in myelin repair research.

So, that's what happened in June. Some really exciting news this time! See you, same place next month?
Posted by Funky Mango at 17:19 6 comments: