The #OscarPistorius case: a fallen hero, a horror story, and sick jokes

For as long as I can remember, I've been an athletics fan. It's such a pure form of sport: who can run fastest, jump furthest or highest, throw furthest? It's competitive, but each individual is trying to beat their own personal best mark as well as the competitor in the next lane.

Historically, Paralympic sport has been far less prominent than mainstream, so it's been great to see South African Oscar Pistorius, the "Blade Runner", become one of the best known world sportsmen over the last few years, 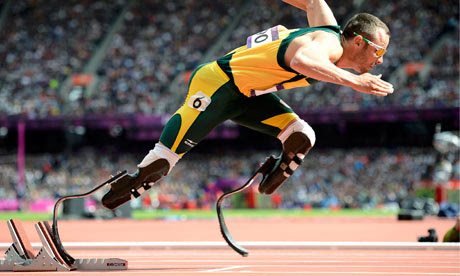 Although he was already well known in Paralympic sport, his real fame came after he challenged the IAAF to be allowed to take part in mainstream events. They felt that his artificial legs gave him an advantage over able-bodied runners, claiming he had to use less energy to run with them.

After an appeal, Pistorius was cleared to run with able-bodied athletes, and in 2012 in London he became the first double amputee to compete in an Olympic Games. He also won 2 gold and one silver medal in the 2012 Paralympic Games.

It seemed that Oscar Pistorius was truly the golden boy of the Paralympics movement, and of South Africa. He was a hero to millions around the world (including me) and a role model to disabled young people. What could possibly go wrong?

Early in the morning of 14th February 2013, Oscar Pistorius shot and killed his girlfriend, model and campaigner Reeva Steenkamp. That is not in doubt. The reason for the shooting is: whether it was deliberate or accidental.

I'm not a lawyer, nor was I in the courtroom for the bail hearing, nor obviously in Pistorius's apartment. So I'll confine myself to saying that Reeva Steenkamp's life has been cut tragically short, and her family's lives blighted. And whatever happened, Pistorius will never be the same golden young man again.

Within minutes of news of the shooting appearing on sites like Twitter and Facebook, the jokes started. You would think jokes about a tragic death would be tasteless enough, but these focused on Pistorius's impairment. The same has happened with other disabled personalities, including swimmer Ellie Simmonds after last year's Paralympics.

Disablism isn't always as simple as physical attacks or direct insults against people with disabilities. And being told "Don't be daft, it's just a joke!" or "You just don't have a sense of humour!" doesn't help.

After the UK's excellent performance both in the delivery of the Olympic and Paralympic Games and in competition, it seemed possible that the legacy would include a new attitude to disabled people. On this evidence? Maybe not. We still have a long way to go.
Posted by Funky Mango at 08:19 1 comment: