Unhelpful response to the #WOWpetition

I don't know if you're already aware of the WOW petition. It was started a little over 3 months ago by comedian Francesca Martinez, and is well on target to achieve 100,000 signatures by its closing date. That means it would considered for debate in the House of Commons. 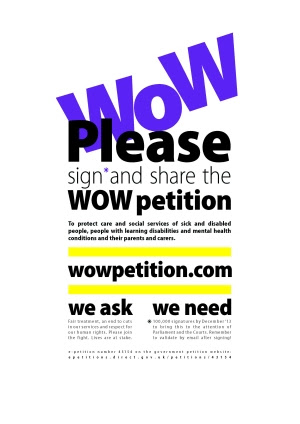 WOW stands for War on Welfare. Because frankly, that's how it does feel. Like this soulless government has declared war on those of us forced to claim welfare benefits.

Let's say you're on Disability Living Allowance, and when that gets changed over to Personal Indepencence Payment you lose out. Well OK, that's just one thing (apart from the blue badge, and Motability car, and disabled railcard, and so on that it passported it you to). Maybe you can manage without the DLA. Maybe.

But you're also on contributory Employment and Support Allowance, and you've been on it nearly a year. So that's about to stop.

And that's before we get anywhere near the changes to Council Tax Benefit, and to Housing Benefit (the Bedroom Tax).

Tens of thousands of sick disabled people are about to go under financially. And this government just doesn't give a damn. Oh, they always have a soundbite:


There's a lot of misleading stories about the impact of our welfare reforms on disabled people, which could lead to unnecessary scaremongering. Our reforms will make sure the billions we spend every year give more targeted support and better reflect today's understanding of disability. Hundreds of thousands of disabled adults and children will actually receive more support than now with the combined effect of benefit changes under universal credit.

Targeted. Some people receiving more support than now. Well, as someone pointed out to me today (thanks Eggy!) all the NHS funds don't get allocated to intensive care: support is required at all levels of need.

So, returning to the WOW petition, what it asks for (among some other things) is a cumulative impact assessment, not looking at the effect of each benefit "reform" (*spit*) separately, but how people will be affected in real life. Real people are complicated. Lots of us claim more than one benefit (partly because the system's so complex!)

When a government e-petition gets 10,000 signatures, the department responsible for it gives a reply. It's taken a while for the WOW petition's reply to turn up: I only just noticed it, and the petition has over 27,500 signatures.

To summarise the reply, it seems to be:
My reply to that would be, with the greatest possible respect (and as civil servants they would know what an insult that is!) pop down to Ryman's, buy a new scientific calculator and get on with it. These are people's lives you're messing around with (at the command of your political masters), and there is a clear case for a cumulative impact assessment to be done.

If you haven't already signed the WOW petition, would you take a look and consider signing it? The more signatures on the petition, the more pressure sympathetic MPs like Michael Meacher can put on the DWP on our behalf.

Edit: I'm all for avoiding unnecessary government expenditure, so I'm sure it would be fine for the DWP to use this cumulative impact assessment, which Scope and Demos have just done. It calculates that those disabled people most severely affected by the cuts will lose £4,600 each year from what are already low incomes. As Richard Hawkes the chief executive of Scope says:


At the moment there’s no place for disabled people in the Chancellor’s aspiration nation.

Sadly, that seems to be very true.
Posted by Funky Mango at 19:33 No comments:

PCC reply to my complaint about Daily Mail cartoon

I complained to the Press Complaints Commission about this cartoon, which was published in the Daily Mail on 25th February 2013. 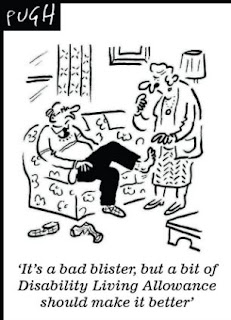 This is their reply.


Commission’s decision in the case of
Various v Daily Mail

Complainants considered that the newspaper had breached Clause 1 (Accuracy) by inaccurately suggesting that DLA could be claimed on the basis of such a trivial injury. They also considered that it had been misleading to imply that people in receipt of DLA do not have genuine need for the benefits they receive.

The complainants considered that the cartoon had been discriminatory towards the disabled, in breach of Clause 12 (Discrimination). A number of complainants also said that they had found the article offensive.

The Commission considered the cartoon to have been a satirical commentary on the availability of disability benefits. Cartoons are a well-established method of newspapers making satirical comments about current affairs, and the Commission would be reluctant to compromise the ability of publications to pass commentary in this manner. Nonetheless, regardless of whether the cartoon’s message was satirical, the newspaper was required to observe the terms of the Editors’ Code of Practice. Clause 1 (Accuracy) states that “the press must take care not to publish inaccurate, misleading or distorted information, including pictures” and “the press, whilst free to be partisan, must distinguish clearly between comment, conjecture and fact”.

The Commission was satisfied that readers generally would have recognised that the cartoon expressed the robust, and even controversial, opinion of the newspaper about the general availability of disability benefits, rather than a statement of fact about the precise circumstances in which benefits can be claimed. While the cartoon had suggested that benefits are too readily available, it had not implied that everyone on DLA was receiving it unnecessarily. The newspaper had not failed to distinguish comment from fact. There was no breach of the Code.

The Commission acknowledged that a number of complainants found the cartoon offensive; however, it made clear that the terms of the Editors’ Code of Practice do not address issues of taste and offence. The Code is designed to address the potentially competing rights of freedom of expression and other rights of individuals, such as privacy. Newspapers and magazines have editorial freedom to publish what they consider to be appropriate provided that the rights of individuals – enshrined in the terms of the Code which specifically defines and protects these rights – are not compromised.  It could not, therefore, comment on this aspect of the complaint further.


I am not satisfied with this response. Does anyone know if there are further steps I can take?
Posted by Funky Mango at 11:50 2 comments:

Labour doesn't represent me any more

I have voted Labour at every election since I gained my majority, and became a member of the Labour Party around 1990. I am now going to leave the party, and will not be voting for them at future elections. This is not a decision I've reached easily, so I wanted to explain some of my reasons. From conversations with other people, I know I'm not alone.

I have multiple sclerosis and other long-term conditions. I wish I was well enough to work, but I know I'm not. I don't think I'll ever work again, unless there's something I can do from home, for one or two hours each week, and entirely under my own control as and when I feel well enough. 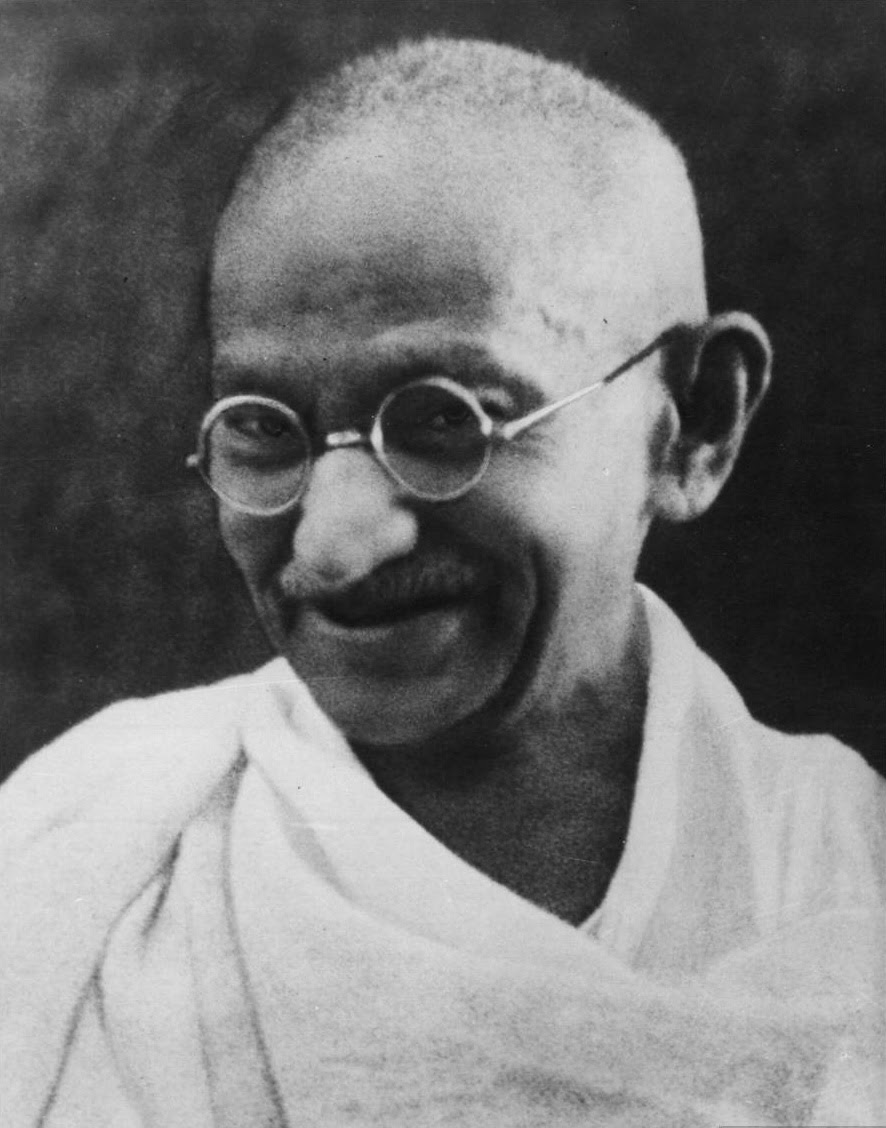 That being the case, I don't think it's extreme to expect society to provide me, and other long-term sick and disabled people, with support. After all, we consider ourselves to be a civilised country, and as Mahatma Ghandi said:


A nation's greatness is measured by how it treats its weakest members.

According to its website, the first and second values on which the Labour Party stands are social justice and strong community & social values. So Labour must agree that sick and disabled people should be supported, right?

Well...it's hard to tell, really. It was the Labour Party which awarded the contract for the unfit for purpose Work Capability Assessments to the iniquitous Atos. They have not, until recently, spoken up against the Welfare Reform Act, which has forced so many genuinely disabled people into abject poverty, and the fear of which has caused many people, sadly, to kill themselves.

Party leader Ed Milliband has relied too much on "I met a man who..." rhetoric, rather than engaging with the issues and meeting those with first-hand knowledge of living with long-term sickness and disability. Was the party trying too hard to keep the support of the middle ground, poisoned as they were by media and ConDem stories of benefit scroungers?

Through all this, and other issues (that's just the one most personal to me), I kept my faith with the Labour Party.

As I write this, the House of Commons is debating emergency legislation brought in by the government so that they don't have to pay back benefit owed to jobseekers after the Poundland workfare ruling. It seems obvious how Labour would vote in this debate. Labour, yes? It's a debate about the use of people's labour. Whether people deserve to be paid for...their labour. The Labour party came out of the whole workers' rights movement. And think back to those values: Social justice. Community and social values.

Well, the Labour Party have told their MPs to abstain.Yep, not vote at all. I mean...what? 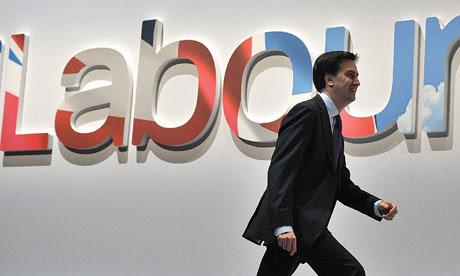 So, Labour Party, it's not me, it's you. You walked away from me. You don't represent me any more. I'll be resigning my membership. Ironically, it looks like I'll be abstaining in future elections, as there's no other party I could bring myself to vote for.