Doctors do, in the main, appreciate that the symptoms of MS can include dreadful pain. It can be burning, stabbing, shooting, like an electric shock, pins and needles, or - my personal favourite - like your limb is being sawed through. Lovely.

When this pain is bad, it really stops you in your tracks: but the DWP don't seem to see it as relevant to whether you can work or not.

If you're claiming Employment and Support Allowance, you're likely to be called to a Work Capability Assessment, carried out by the private company Atos. Incidentally, Atos is getting these assessments spectacularly wrong - and that's if you can get into their offce, if it's not one of the ones that's inaccessible to people in wheelchairs.

The assessments are done by "healthcare professionals" - doctors, nurses, physiotherapists or occupational therapists - who may have no knowledge at all of your condition. They complete a computer questionnaire based on your answers.

The questions are all about your ability to perform physical tasks. There is no recognition of pain, fatigue, or the fact that you might be able to perform a task once, but not repeatedly.

Never mind us not being fit for work. The Atos tests aren't fit for purpose.

So it's great that Scotland's GPs have called for an end to Work Capability Assessments.We, sick and disabled people, have known about the problems with them for a long time, but it's great to have recognition  from the medical world. Dr Steven Carty, an Edinburgh GP, said:

This sends a ray of hope to some of the weakest and most vulnerable in society.
It also sends a clear message to other representative bodies including the General Medical Council (GMC) of the significant concerns shared by many GPs across the country.
In my opinion the current contractual arrangements between the DWP and General Practice are unsustainable. The WCA as performed by ATOS is not an effective or safe method of determining "fitness to work" and this must be addressed.
All doctors are duty bound by the GMC to report any system or process that may be harmful to patients. The WCA is a harmful process. Scottish GPs have spoken: the GMC cannot remain silent on this matter any longer.

Let's hope the BMA and GMC respond to this call and also condemn the WCA (so many acronyms!)

We certainly can't go on with this flawed system, which doesn't recognise symptoms which are such a major part of sickness and disability for so many people.

A quick post, to sing the praises of an essential bit of kit. It's indispensible for anyone who has a disability that means when they need to wee, they need to go now, people with bowel problems, if you need a bit more room to manoeuvre, or if you need the assistance of someone else. 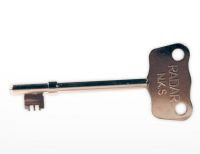 It's the Radar Key, a universal key that fits the doors  of thousands of disabled loos around the country. In most cases there'll be a key available somewhere - but who wants to go searching for the railway station manager, or trying to attract the attention of the bar staff in a busy pub, when they're desperate? Much simpler to have your own!

Having your own key also avoids the potential embarrassment of needing to announce out loud that you need the loo. Able-bodied people don't have to go through that, so why should we?

Radar keys really can be invaluable, and they only cost a few pounds. A must-get!
Posted by Funky Mango at 12:33 No comments: