Last night saw the first in Ricky Gervais's new series Derek. I posted about the pilot when it was screened last April, and I've never made any secret of the fact that I wasn't a fan. It seemed unfair for me to dismiss the series without seeing it, though, so I watched last night. The result was many, many thoughts - and here are some of them. 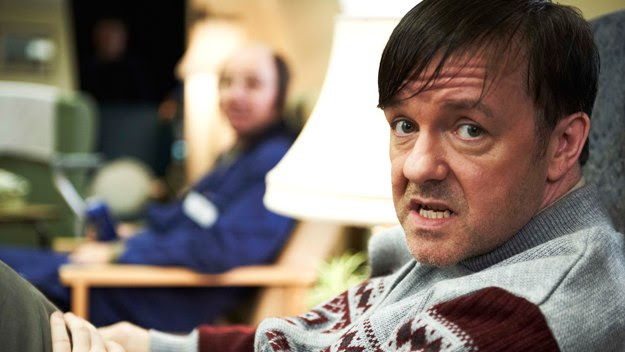 It's in Gervais's customary fly-on-the-wall mockumentary style. 50 year old Derek is a volunteer helper in a care home. His best friends are manager Hannah, odd job man Dougie, and a homeless man, Kev. I couldn't quite work out the purpose of Kev. He is unpleasant, smelly, alcoholic, and sexist, and really just hangs round on the periphery. Perhaps he's meant to be the antithesis of Derek's goodness and innocence?

The first episode had perhaps the most predictable plot possible for a show set in a care home. It was threatened with closure and the characters rallied round to save it. Additionally, of course, this is a timely story, with the current social care cuts.

Channel 4 billed  Derek as as a "bittersweet comedy drama", but to me there was neither enough tension for drama nor enough laughs for a sitcom. I was annoyed by the attempts to signal what emotion we should be feeling:  the sub-Einaudi piano music to show that this was a poignant or sad moment was a prime example. At times I was in danger of dying from a saccharine overdose, such as when Hannah explained the importance of caring.

It has to be said that many people loved the programme. The tweets below are just a couple of many examples.


#Derek was an emotional rollercoaster, had me crying & laughing in 30mins. Funny, sad but true and very insightful. (Emma J Fonzarell)

But others took issue with the accuracy of the setting:


@rickygervais Have you ever set foot in a care home? I know you think it's hilarious to be misinformed but come on, #Derek is lazy writing. (Bitsy)

One issue that keeps coming up is whether the character Derek is disabled. Ricky Gervais continues to insist that he's not, that he's simply naive and innocent, whereas many viewers are in little doubt that Derek has some kind of learning disability. Actor and comedian Peter Serafinowicz questioned:


Why has David Brent got Down's Syndrome? #derek (Peter Serafinowicz)

In  possibly a direct response to criticisms of the pilot, this was raised in the programme, with "man from the council" Roger asking Derek whether he'd ever been tested for autism.


'If I'm autistic would it change me? Would it kill me? Would it make me a different person?' 'No.' 'Then leave it.'

Now that's all fine for Ricky Gervais, but in real life, a diagnosis can be hugely comforting to the parents of a child with autism. A rather glib and uninformed attempt at manipulating the emotions of the viewers.

Derek has been around since the late 1990s. Back in 2001, Ricky Gervais and Stephen Merchant discussed the character.

In the end though, does it matter if Derek is disabled or not? A lot of comedy is about people doing stupid things. The problem comes when it goes beyond "mainstream" stupidity. Are we laughing at the characters or with them? In sitcoms like I'm With Stupid disabled characters are played by disabled actors, and the disabled man who originated the idea was story consultant for the series. A character with a disability being played by a non-disabled actor - particularly in a comedy - can raise questions about how accurate and sensitive their portrayal is.

And what effect will the portrayal have on public attitudes to disabled people? Comedian Stewart Lee, writing about the original YouTube videos of the character, said:


"...watching Gervais's Derek Noakes on YouTube, I imagined feral children trailing real Dereks around supermarkets, chanting "Derek Derek", as they doubtless would were the series to be made, and wondered if, sometimes, discretion is not the better part of valour."


@JonnyLobster @jmonkey_12 try an guess who i sm ya fucking beaut!! Bet ya dnt know cause ya #Derek (Bernie Wog)

.@rickygervais hey man! Saw #Derek ! So glad someone is finally making a sitcom where we can laugh at retards! Classic Mate! (Alex)

And as I recounted in my previous post about Derek, I have had a group of kids shouting "Oi, Derek!" at me in the street.

I suspect what Gervais was aiming for was a version of Forrest Gump, where innocence and goodness triumph in a confusing and wicked world. Did he succeed? Not for me. It was too maudlin. Ricky Gervais can be very funny, but he needs someone - Stephen Merchant does it par excellence - to keep him from tipping over the edge into self-indulgence.

Perhaps if there's another series of Derek, the title character should be played by a disabled actor. I'd take more interest in that.

On 28 January 2013 the UK government is due to make a set of changes to the Work Capability Assessment (WCA). The WCA is the flawed ‘fitness to work’ test which assesses whether sick and disabled people can get Employment and Support Allowance (ESA): a benefit designed to help and support very unwell or profoundly disabled people into work.

Although these changes have been advertised as small ‘amendments’, they will in fact have a huge impact on the way people’s illnesses and disabilities are assessed. Many vulnerable people’s needs will suddenly be able to be overlooked or ignored, meaning they could end up losing the support they desperately need to manage their conditions.

Hundreds of thousands of sick and disabled people across Britain need your help to fight these changes!

PROBLEM 1: FALSE ASSUMPTIONS
In the fitness to work test, your needs are assessed by a ‘healthcare professional’ employed by the French private company ATOS. This assessor doesn’t just need to look at your current difficulties. For example, they can also imagine how using an aid (e.g. a wheelchair) might improve your ability to work and make a judgement based on that – without even asking your opinion!

However, soon this “imaginary test” will be able to be used for many more aids (including guide dogs and false limbs!). This means that soon thousands more people could be judged as fit to work, without being consulted, on the basis of an “imaginary” aid they don’t own or may not be able to use!

It gets worse. Even if returning to work may clearly put you at risk, these changes will mean you can still lose your disability benefit – as long as the assessor believes that trying a new therapy or treatment might reduce that risk. There’s no need for evidence that the treatment will help: you will lose support either way, making it much harder to manage if the treatment doesn’t work as hoped – let alone if it ends up making things worse.

>>> Imagine Bert, who suffers from severe schizophrenia, but is found fit to work and made to take behavioural therapy in the hope of improving his condition. He will lose his disability benefit, without the assessor having to look at several vital questions: how hard it would be for Bert to contact a psychiatrist? How long would an NHS appointment take to organize? Are there private options in his area – and could he afford them if so? What if the therapy doesn’t work, or takes a long time to adjust to? If the government’s rule changes go through, people like Bert who are desperate to work will find it nearly impossible to get an accurate assessment, affecting the quality of their support and actively preventing their efforts to get back into work <<<.

PROBLEM 2: SEPARATING PHYSICAL AND MENTAL HEALTH
The government is also trying to change the way people’s conditions are assessed by dividing health problems into two separate boxes: ‘physical’ and ‘mental’. So, for instance, when looking at what tasks people can do, only the ‘physical half’ of the test will apply to those with physical disabilities. The same goes for the effects of treatment: for instance., if you’re taking mental health medication, only mental health side-effects will be looked at.

This completely fails to understand the way that many disabilities and illnesses can lead to both physical and mental effects. This is also the case for many common treatments: such as those for schizophrenia, Parkinson’s disease and multiple sclerosis.

>>> Think of Emily, who suffers severe, chronic pain because of nerve damage to her leg. Emily is among the 49% of chronic pain sufferers who also suffer depression as a result of continuous pain. An assessor may see Emily as able to do some work as long as she takes strong painkillers for the rest of her life, meaning she could pass the ‘fitness’ test. Yet the painkillers may not deal with the depression caused by her condition. Painkillers have also often been shown to affect people’s wakefulness and decision-making. So taking the medication may affect Emily’s ability to do a job in a completely new way – yet because these new problems are cognitive, they would not need to be looked at by the assessor when making their decision. <<<

Pretending the effects of illnesses and disabilities can be separated in this way goes against all medical practice. Going even further, and using this method to ignore sick and disabled people’s needs, is at best hopeless policy, and at worst deliberate cruelty. We cannot let the government treat some of the most vulnerable people in British society in this way.

HOW YOU CAN HELP
The main way you can help is by spreading the message about these changes to ESA. The government have tried to sneak them under the radar – the last thing they will want is people talking about them!
1) Email your MP (you can search by name or constituency at http://www.parliament.uk/mps-lords-and-offices/mps/);
2) Share this blog post on twitter (using the hashtag #esaSOS), Facebook and other social media. Click on the buttons below this post to share on Twitter and Facebook.
3) Email your friends and family a link to this post – or simply talk to them about it! Again, the main way we can get the government to reconsider is by getting people to talk about the injustice of these changes.So please spread the word as far and wide as you can!

Thank you so much for reading this far. Now let’s make sure these unwanted, damaging benefit changes never see the light of day!

If you want to do more, please sign #WOWpetition and call on the government to think again.  Ask all of your friends to sign too!

The full #Spartacus briefing on the proposed changes to ESA can be found here.
Posted by Funky Mango at 10:00 6 comments: