This post is part of Blogging Against Disablism Day 2011, being run by Goldfish over at Diary of a Goldfish. Check it out for many superb posts on the general topic of disability and disablism

I confessed in a previous post to being a hardened and unashamed Gleek - addicted to the TV show Glee. I love its mixture of music, corny humour, and a huge dollop of cheese on top. One thing that's concerned me, though, is the programme's portrayal of disability. Three stereotypes of disability are often used to typify people with impairments in mainstream media:
There are three obviously disabled characters in Glee. I'll consider them separately, as I believe that each represents a different one of these stereotypes.

Artie Abrams, played by the able-bodied Kevin Hale, uses a wheelchair following a car accident when he was 8. He dreams of some day walking again: at one point he tries (and fails) to stand using crutches, and his girlfriend at the time, Tina, researches spinal cord injury treatments for him. In the current season he tries out for the school football team. In a daydream, he dances upright again.


Artie typifies the "disabled person longing to be normal".

The other two obviously disabled characters in the show both appear to have Down's Syndrome. 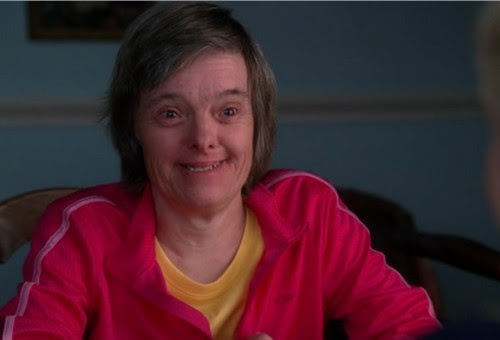 The first is Jean Sylvester, sister of the evil cheerleading coach Sue Sylvester. She is played by Robin Trocki, and appears in the show only occasionally. Although Sue is the "baddie" in the programme, she does occasionally show acts of kindness, often flagged up none too subtly with a visit to Jean in her Assisted Living home immediately before or afterwards. Jean's unquestioning love for Sue seems to act as her conscience, to make her act in a way that is otherwise out of character for her.

Jean typifies the "disabled person as pitiful, innocent and good"

The last of the obviously disabled characters, also linked with Sue Sylvester, is Becky Jackson, played by Lauren Potter. Sue accepts Becky into the cheerleading squad, the strong implication being that this is because Sue's sister also has Down's Syndrome. However she rapidly becomes Sue's understudy and "mini-me", helping her in her devious plots, sitting in judgement in cheerleader auditions, and so on.

Really, the only one we're missing is "disabled person as brave" and we'd have the complete set. Actually, thinking about it, in season 1 an episode called Laryngitis featured Sean, an American football player who'd become paralysed from the upper chest down in a game. And yes, he'd learned to deal with it, a person is not just one thing, the whole nine yards. So we have our complete set.

Probably the most controversy has been caused by Kevin McHale's portrayal of Artie: why is an able-bodied person playing the role of a wheelchair user? Studio bosses claim that they auditioned both able-bodied and disabled actors, but it was difficult to find anyone who could really act, really sing, and had the level of charisma required. But y'know...why were they auditioning able-bodied actors for the part of a disabled kid in the first place?

Glee still hasn't worked out how to show disability properly. Really good depictions of disability involve characters who just happen to be disabled, not characters whose every storyline centres around their disability. Let's hope they finally take some advice from the many disability organisations who are trying to show them the way.
Posted by Funky Mango at 04:56