The Medical Ethics Association, the Telegraph, and the LCP

The Daily Telegraph recently carried an emotive, distressing story. Six doctors had written to the paper suggesting that the Liverpool Care Pathway (LCP), a structured system of care ensuring that people in their final days or hours of life are in as little distress as possible, was being applied inappropriately to reduce strain on hospital resources.

The aim of the LCP is to unite members of the multi-professional team concerning continuing medical treatment, discontinuing treatment, and comfort measures in the last days and hours of life. All non-essential treatments and medications are stopped. Treatments may be started for symptoms such as pain, nausea, or breathing problems.

In some cases, for instance if pain can't be controlled, terminal sedation may be used. As patients receiving this type of deep sedation are typically in their last few hours of life, artificial hydration and nutrition are not given: the patient wouldn't be eating or drinking significant amounts anyway, and fluids may make distressing symptoms like respiratory secretions and pulmonary congestion worse. Palliative sedation therapy doesn't hasten death: it just makes it less uncomfortable. 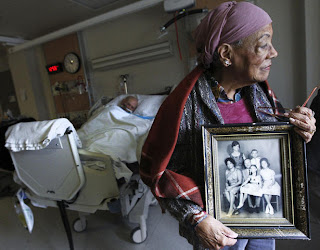 There were several things in this article I...took issue with, shall we say. I'll list them below.
If, as the doctors suggest, informed consent is not always being sought for going onto the LCP, then that's wrong and needs to be sorted out. But it's no excuse for scaremongering like this from the Medical Ethics Alliance and the Daily Telegraph. The LCP is good, compassionate, and evidence-based. It'll be a damn shame if people are too frightened to use it.
Posted by Funky Mango at 14:57