Too clean to be healthy? Maybe not.

Have you ever had food poisoning? Maybe from a dodgy kebab, or a suspicious curry? We might think that we're only going to get food poisoning in the kind of restaurants that turn up on Grimefighters, but according to the World Health Organisation, around 40% of outbreaks happen in the home.

For more than 20 years, the hygiene hypothesis has been a dominant theory in immunology. The idea goes that our homes are basically too clean: a lack of early childhood exposure to infectious organisms and parasites increases susceptibility to allergic diseases (and possibly some auto-immune conditions) by suppressing the natural development of the immune system.

Now a new study has challenged this theory. The researchers found that changing exposure to microbes could indeed be a factor in the rise of allergies, but there was no evidence that current cleaning habits are to blame. The authors denied that we are living in super-clean, germ-free homes.

Recently disinfectant company Zoflora commissioned a study of 2000 adults from across the UK, looking at their attitudes to home hygiene. 66% of us say our homes are not as clean as they should be, and 19% say they are not clean at all. Just under a third of us are so worried about the cleanliness of our homes that it can keep us awake at night. Many felt anxious, stressed or depressed about having an unclean house. 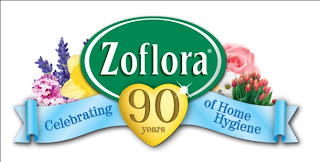 
Our homes are fertile breeding grounds for bacteria to grow and multiply. Common microbes found in our houses include ‘superbug’ methicillin - resistant Staphylococcus aureus (MRSA) and bacteria like Campylobacter, a common source of food poisoning. A study commissioned by Zoflora found that a shower head had 300,000 times more bacteria than a set of front door keys – bacteria thrive in warm, damp places.

Research has shown that flushing a toilet sends a spray of water droplets into the air which may be contaminated with bacteria and viruses, and that these germs can float around in the bathroom for at least two hours after each flush before landing on surfaces. A study of 60 kitchens where raw chicken was prepared found that bacteria were frequently spread around – and that cleaning with detergent and hot water had little effect compared with the cleaning action of a disinfectant.

Cleaning with disinfectant isn't going to make the home completely sterile. If it did, we'd be dead too. We'll still come into contact with harmless bugs. But we can get rid of real pathogens like MRSA, E.coli, Campylobacter, and the flu virus H1N1.