I'm currently listening to music (the album A Curious Thing by Amy MacDonald, if you're interested), watching athletics on the telly, and attempting to write this. I used to be an ace multi-tasker. These days, my MS-ified self can barely cope with one thing at a time. So the fact that I've taken on three at once means that at least two of them are going to suffer. Life with MS is all about juggling your commitments, because of the effects it has on your cognitive skills. 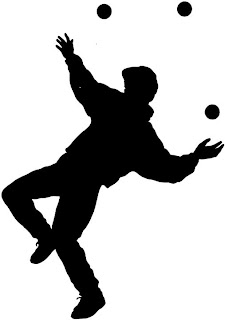 Cognition is the term used to describe a person's "thinking ability". People will often realise they are starting to have cognitive problems when they begin to find it hard to read books or follow conversations. Cognition includes:
Mild cognitive problems are common in MS.It's thought that somewhere between 45% and 65% of people with MS have some degree of cognitive problem, though as with every symptom the degree and profile varies from person to person. It is most severe in people with secondary progressive MS. People with primary progressive MS seem to be rarely affected, possibly because this type of MS prefers to attack the spinal cord rather than the brain.

The most common problems are in:

There seems to be little association between someone's level of physical disability and their cognitive problems. Cognitive changes can worsen with a relapse, or when the person is tired. People with MS rarely experience cognitive impairment as bad as that with (for instance) Alzheimer's disease, and then only in the very late stages of the disease.

The level of impairment can stabilise at any time rather than continuing to progress. Most people with MS who have cognitive impairment have mild symptoms.

Most of the ways of trying to deal with cognitive impairment are behavioural. They include things like:

So, I've moved on to Snow Patrol's Eyes Open, the athletics are still on, and I'm thinking hard here about what my conclusions should be. But given my cognitive impairment, and my problems with pattern formation and word finding, I don't really have any. Except that I really should stick to one thing at a time...
Posted by Funky Mango at 15:11