I've posted before about individual symptoms of my MS - sleep problems, fatigue and so on. The idea of this post is to describe a "typical" day, to show what my life as someone with MS is like. I'm not describing any one particular day, but I'll try hard not to exaggerate and make it some sort of extreme horror show.

My sleep pattern is pretty messed up, so I wake up at 4am. I know I won't get back to sleep for a while, so I get out of bed using my bed lever to sit upright, swing my legs round and stand up. I shuffle towards the toilet, accidentally kicking the cat on the way (he will sit where I'm about to be!) As a result, I lose my balance and collide with the bathroom door. Fortunately only slight bruising on my arm and shoulder.

Having completed my ablutions, I make a drink, only scalding my hand a bit this time, then go through to the living room and curl up on the sofa. I now have a pretty comprehensive knowledge of very early morning TV. In fact, I'm thinking of making it my specialist subject on Mastermind. To my shame, there's a pretty dreadful reality show called Guilty! I've become fairly addicted to.

After a couple of hours, I conk out again. At least I assume I do - I have no knowledge of the process. It's like someone slugs me with a baseball bat. The only way I know roughly when it happens is because of what TV I remember.

I wake up again around 11. Well, I say wake up - it's Dawn of the Dead stuff for about the first half hour. Not only can I not do whole sentences, but words that seem quite comprehensible inside my head come out as grunts and mumbles. If I manage to stay awake, I can start moving around, getting off the sofa, that kind of thing.

Next to me is a cup of cold coffee. This means that while I was asleep, my carer has let herself in, done her work, and gone. It's a Monday, so the work included hoovering all around me without me stirring. When I sleep, I sleep! I'm reminded of the time I fell asleep in a lobby in my wheelchair, and woke up to find myself in a hoovered lobby, in a wheelchair-shaped dirty spot.

By this time, the cat is demanding attention. He's a breed called an Abyssinian. They're the ones who were worshipped as gods in Ancient Egypt. Unfortunately, someone once told him he's a god, and ever since he's demanded worship as his due even more than most cats! He also has both hollow legs and a hollow tail. I feel like I spend most of my day trailing back and forward between the sofa and either the kitchen or the door. 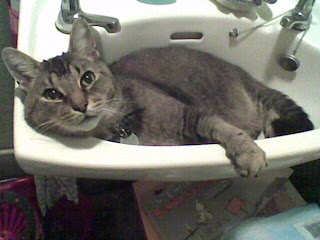 One o'clock, and the carer comes back for my shower. No, no photos! Showers bring another level of exhaustion, though. A lot of people with MS (including me) find that their symptoms are made worse by heat, especially steamy heat. So really, baths and showers aren't ideal, while clearly they're great for keeping you clean.

I was hoping to do some reading today, but my brain decides not to cooperate. Instead I spend lunchtime and the afternoon basically staring into space. I can't even concentrate on Jeremy Kyle. Finally, about 4, I feel like I can do a bit of work, so I do some studying.

When I took ill with what turned out to be MS, I was in the later stages of a BSc in Health Studies. I managed to complete it with first class honours. I was determined to carry on an academic career as far as I could, and registered for a PhD. I was only about 6 months from completion when I had to drop out - the fatigue and cognitive (thinking) effects of the MS had just got too bad.

I still have the studying bug though, and I've registered to do a first year undergraduate short course, in a new topic area for me. I'll see how it goes. I don't want to lose touch with studying completely, but I also don't want to overdo things. That would just make things even worse.

Time for food, and I stick a ready meal in the microwave. I very rarely have the energy to do anything more than that: even when I do, it would be something like cheese on toast, or an omelette. Some days I don't even have the energy for the ready meal option, and have to get a takeaway delivered.

After my meal...dammit, I fall asleep again, and miss my favourite television. (It's Monday, so yay, Glee) (Yes yes, I know, don't judge me)

When I wake up again, it takes me a while to work out the time - could be any time from 8 to midnight. I eventually realise that it's about 9, and there's still plenty of time to go online and chat to my online MS friends. In fact, since I've just been asleep, I don't want to go to bed too early, in the hope I might sleep a bit longer overnight.

Online I go, to the chatroom at the wonderful Jooly's Joint, and to chat to Eggy, Mel and Sarah (strict alphabetical order girls!) on MSN Messenger. About 11.30, I say goodnight, feed the cat for the final time, take my final vast dosage of medication (ah yes, I haven't mentioned that) and head off to bed, still stiff and in pain.

So that's a fairly typical day. #disabilitynormal, in fact, for a #spoonie. I'm still waiting for the forms for my Employment and Support Allowance (ESA) review, but while I'm reasonably sure they won't put me on Jobseeker's Allowance, it's quite possible I'll be put in the Work Related Activity group, and have to undertake activities "with a view" to working in the future. In view of all the above, do you know anyone who would employ me? Really? I'd love to work again, but....really?
Posted by Funky Mango at 14:45