To sleep, perchance to...sleep some more

One thing many people with MS (and other spoonie conditions) rapidly become familiar (/obsessed) with is sleep. Too much of it, too little of it, more or less the "normal" amount but at the wrong times of day...

So, in this post I'm going to be describing some of the sleep problems that can affect people with MS, as well as a common sleep disorder, not specific to MS, that can potentially make some MS symptoms worse.

Hypersomnia is excessive sleepiness - where a person has problems staying awake during the day. People with hypersomnia can fall asleep at any time, for instance when they are at work or while driving. They may also have other sleep-related problems, such as lack of energy or lack of ability to think clearly.
Causes of hypersomnia include neurological diseases like multiple sclerosis, sleep disorders like narcolepsy and sleep apnoea (see below), sleep deprivation, head injury, being overweight, and some prescription drugs. Treatments include stimulants and newer drugs such as Provigil.
Insomnia is characterised by persistent difficulty falling and/or staying asleep, or sleep of a poor quality. There are many possible causes, including neurological disorders, pain, disturbances of the circadian rhythm such as shift work and jet lag, restless leg syndrome, and use of stimulants including certain medications and caffeine.

The first line of long-term treatment should be non-pharmacological, as resistance can build up quickly to medications. In addition, dependence can occur, with rebound withdrawal effects when the medication is stopped. One useful technique is sleep hygiene. This is defined as:


...the controlling of all behavioural and environmental factors that precede sleep and may interfere with sleep.

Sleep hygiene involves factors relating to:
It's only if "behavioural" techniques like this do not work, that medications like zolpidem (Stilnoct, Ambien) should be considered.

Sleep reversal is like permanent jetlag. It occurs when people's sleep patterns have been disrupted - they sleep at inappropriate times, and can't sleep when they should. Help suggestions include many of the sleep hygiene suggestions above: not to eat, drink or smoke too close to bedtime; to create a sleep-conducive environment; and to create a relaxing environment, for instance by having a bath before bed. Other suggestions include gradually advancing the sleep schedule by going to bed and waking up 15 or 20 minutes earlier each day.

Finally, a sleep disorder that is not specific to MS, but is surprisingly common, and could potentially make MS symptoms worse. Sleep apnoea is a condition that causes interrupted breathing during sleep, due to the muscles and soft tissues of the airway relaxing sufficiently to close the airway and stop breathing. It's thought that 4% of men and 2% of women have sleep apnoea.

During sleep, someone with sleep apnoea can have repeated interruptions to their breathing. Each time, the reduction of oxygen causes them to come out of deep sleep and into a lighter phase of sleep, or into a brief period of wakefulness. These interruptions may in some cases happen more than once per minute.

These repeated interruptions to sleep can make the person with sleep apnoea feel very tired during the day. They will usually have no memory of the periods of breathlessness. 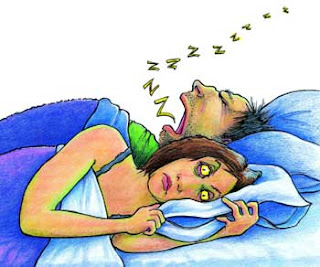 Most people with sleep apnoea snore very loudly.Their breathing during sleep may be noisy and laboured, interrupted by gasping and snorting with each episode of apnoea. In fact, it is often diagnosed because their partner comments on this pattern! Other symptoms include feeling very sleepy during the day, poor memory and concentration, anxiety and depression.

If sleep apnoea is suspected, it is likely that the person will be asked to undergo testing at a sleep centre - a specialist clinic or hospital department helping people with sleep disorders. There, technicians will place a number of sensors on the patient's body to assess them while they sleep.

Once sleep apnoea is confirmed, mild cases can usually be controlled by lifestyle changes such as losing weight, stopping smoking, and limiting alcohol consumption. Moderate to severe cases may need to be treated using continuous positive airway pressure (CPAP), which involves using breathing apparatus to assist with the breathing while asleep.

So, if someone with MS (or other spoonieness) also had sleep apnoea, treating their sleep apnoea could help with some of the symptoms of their MS - sleepiness, anxiety, depression, and so on.

I should stress that as far as I'm aware there's been no research into any link between MS and sleep apnoea. This is just a little pet hobbyhorse of mine!

I don't think there's anything around that can completely "cure" our sleep problems. There are certainly things that can help with them though. It's all about team-work between us and our healthcare professionals!
Posted by Funky Mango at 16:27