Over the last week, we have all been horrified by the scenes of violence and criminality shown in Tottenham, Ealing, Hackney, Croydon in the London area, as well as further afield in England, in cities including Manchester, Birmingham, Nottingham and Bristol. 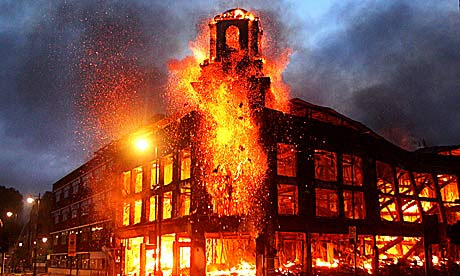 Those responsible are now being arrested and dealt with through the justice system. Everyone, and his dog in many cases, has spouted forth his or her opinion of the causes of the rioting. One factor frequently cited by the chattering classes (much like myself, you might say. And probably rightly) is the alienation of young people, and of the "underclass" that has developed under this and other governments, brought to a head by the savage programme of cuts introduced since the last General Election.

This may be true. The official inquiry into the causes of the rioting might look at such things - I hope so.

But there are other groups, equally alienated by their treatment by successive governments, and equally if not more affected by government cuts. Why weren't they out there rioting, looting, and setting fire to things?

They? I mean us. Disabled people.

Yes, things are better than they were in relation to accessibility, job opportunities and so on, but they're not improving nearly fast enough. Disability hate crime is still a regular occurrence and not taken nearly seriously enough. And we're facing frightening, ideologically motivated cuts to our benefits. Why shouldn't we be out there rioting?

Well, first of all, there's the practicalities of the matter. Few of the shops being looted looked very wheelchair accessible - through the windows at least. And wouldn't the glass puncture the tyres? For those of us who have disabilities that are also illnesses, it's difficult to do anything spontaneous like that. And what about if you need a PA to get out?

Then there's the age profile of the rioters. Overwhelmingly, those charged with riot-related offences are young, about 3/4 being under 25. Disabled people, on the other hand, tend to be older than the general population: although of course there are disabled children and young people, many disabilities only come on with age, so the number of disabled people in the population increases with age. With age comes...well, let's call it wisdom. Or maybe it's apathy. Something like that, anyway.

I think all of us, even living in our own homes rather than in care or nursing homes, undergo a kind of "institutionalisation" - to be placid and well-behaved little crips. It's hard to break out of that, to fight against it either physically or with your words.

This, along with the physical and logistic problems, is why it was such an impressive achievement when thousands of disabled people participated in the Hardest Hit march in May, protesting against cuts to disability benefits and services. It's a real shame that their strength and commitment got so little media coverage, in comparison to that given to a few trouble-making idiots on the TUC March For The Alternative. 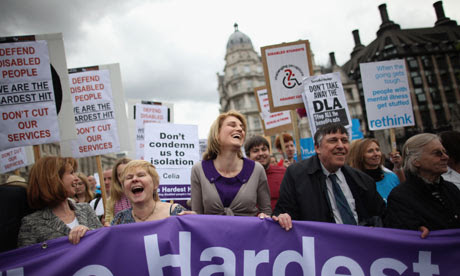 So. Why weren't disabled people rioting? Some of the rioters probably were disabled of course, as not all disabilities are visible...but in general?

For most of us, I imagine it's because, the same as me, we know what's right and what's not. In other cases, it's just too damn difficult! Maybe some people don't feel national politics affect them?

Damn. Wouldn't it have been easy if there was one nice easy knee-jerk cause and solution?
Posted by Funky Mango at 19:43