The right model for killing yourself

"Martin" is 46 and has locked in syndrome He's asking the courts to clarify the law so that doctors and other medical staff who might help him end his life would not  be prosecuted. 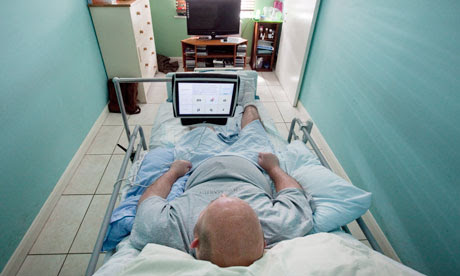 This is an extension of Debbie Purdy's case, from two years ago. Purdy successfully argued in court that it was a breach of her human rights not to know if her husband would be prosecuted for assisting her suicide if he accompanied her to a clinic in a country where assisted suicide is legal.

"Martin's" case extends this to doctors and other medical staff, rather than lay-people. His wife has accepted his decision, but does not feel able to assist him.

At least 10% of suicides in the UK are by people with a chronic or terminal illness, and coroners believe that people are increasingly killing themselves at a younger age rather than wait until they are in severe pain. Some coroners avoid probing into what they suspect might be a case of assisted suicide, to avoid causing problems for those left behind.

So why do all these people with long-term illnesses feel that the appropriate response to their circumstances is to kill themselves? (Either with or without help). Opinions, inevitably, differ.

Some argue that the decision is made because the condition - the illness, the disability, whatever - has become too much to bear. Others say that these feelings are often because the individual has not had the chance to live as independent a life as possible within society at large.

The individual's condition on one side and society on the other. That sounds very familiar. And yes, it's our old friends the medical and social models of disability again.

Which is more important in an someone's decision whether they want to live or die?  The way their physical disability affects them as an individual, or how easy it is for disabled people to be part of mainstream society?

Just to be upfront, I have no intention (in the foreseeable future) of seeking assisted suicide. But as I've told you in a couple of posts recently, I've been having major problems getting out because of physical problems. At the moment, the accessibility or otherwise of society is kind of irrelevant to me, and my physical impairments are totally primary. At other times, or for other people, the physical problems may be secondary to accessibility, housing problems or employment discrimination.

So overall, I think sometimes the medical model is the right one and sometimes the social model. Or, at least, there's a continuum. At one end is "pure" medical model thinking, at the other end is "pure" social model thinking. Most of us are somewhere in the middle, and we move back and forward along the continuum depending on circumstances. (It's made of nice slidey material. Makes it easy.)

The vast majority of us could never kill ourselves, in any circumstances. And if someone is considering it, whether that decision is rational or irrational is a whole other packet of Jaffa cakes. For those few who have decided to seek assisted suicide though, reasons differ. And that fact must be acknowledged by the disability community.
Posted by Funky Mango at 14:55